Halloween might be over, but horror film lovers still have a lot to look forward to with new movies coming out next year and a few available to stream now!

1. Paranormal Activity: Next of Kin

Margo heads to a secluded Amish community, in the hopes of learning about her lost mother and extended family. Following strange occurrences and discoveries, she soon realizes that the community might be hiding something sinister. The Paranormal Activity series has been a popular film series among horror movie fans and it can be said without a doubt people are excited for its release! With it being the 7th film of the series, Paranormal Activity is not done just yet with their next chapter released in Octobor! It is actually due to COVID-19, that this will be the first Paranormal Activity to not be released in theaters but will be available via streaming platform Paramount+! 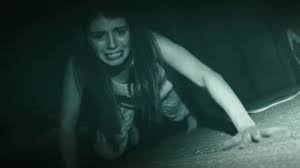 Having been forced to travel with her boyfriend, Laine starts to become worried about the myth of the creeper. Laine believes that there could be something supernatural that was summoned. The new Jeepers Creepers: Reborn is just one of the films in the Jeepers Creepers series and it is a promising hit amongst recent horror movies. Out in theaters now!

Raccoon City was once home to the booming pharmaceutical giant Umbrella Corp. The company’s exodus left the city a wasteland, a dying town with great evil brewing below the surface. When that evil is unleashed, a group of survivors must work together to uncover the truth behind Umbrella and make it through the night. Based on the Japanese video game, the films have differing storylines, but Umbrella City seems to be promising for fans of the franchise. Resident Evil is set to release on Nov 24, 2021 in theaters.

Twenty-five years after the original series of murders in Woodsboro, a new killer emerges, and Sidney Prescott must return to uncover the truth. Neve Campbell reprises her role as the darling final girl with original cast member Courtney Cox also returning. The new scream is set to release Jan 14, 2022 in theaters.

For gore lovers, the latest adaptation of Texas Chainsaw Massacre is available now on Netflix this year! Fans can enjoy the film in their home now!