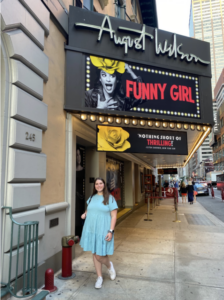 It took almost sixty years to return to Broadway, and now, it’s Broadway’s Greatest Star! Funny Girl is a show based on a semi-biographical musical adaptation of the life and career of Broadway legend Fanny Brice. Set in the 1920s, it showcases Fanny Brice telling the story of her rise to fame and relationship with her husband, Nick Arnstein, to her dressing room mirror before her next performance. This is the first time since the original run in 1964 that this show has played on Broadway in the United States. Currently playing at the August Wilson theater in NYC, Funny Girl is finally a show worth seeing.

The revival show opened in April 2022, with Beanie Feldstein starring as Fanny in this production. However, the production began to falter with performance reviews and ticket sales due to Feldstein’s portrayal of the role. The New York Times refers to her performance and singing voice as, “You root for her to raise the roof, but she only bumps against it a little.” (Jesse Green NYT). The musical needed a makeover, and quickly, so they decided to cast McKinley High School’s most devoted Barbra stan, Lea Michele.

Lea Michele, known for her performance as Rachel Berry on the FOX television series Glee, has taken over the role of Fanny Brice since Feldstein departed from the show in July 2022. Julie Benko, Feldstein’s understudy, assumed the role until Michele took the reins on September 6th, 2022. I saw Michele’s portrayal of Brice on Friday, September 9th; it was her last show before testing on Saturday, September 10th. She may have been sick the next day, but it had not affected her performance the night before. 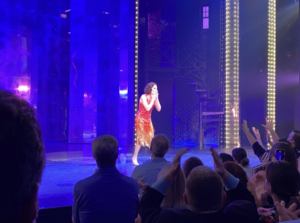 Michele captivated the audience as Fanny Brice and received a standing ovation when the curtains went back and the screen began to rise. Her appearance alone raised the audience to their feet. The performance that astonished the entire audience was Michele’s rendition of Don’t Rain On My Parade. It’s the most well-known number from the show but was the most anticipated and ended up being the night’s best number. Michele received another standing ovation for the performance, which wasn’t her only standing ovation of the night! Lea Michele was meant to play Fanny Brice.

Another character and performance that took my breath away were done by both Jared Grimes, who played Eddie Ryan, and Tovah Feldshuh who played Mrs. Brice. Aside from Michele’s terrific turn as Fanny, Ryan and Feldshuh stole the show as these supporting characters. Grimes plays Fanny’s friend, Eddie Ryan, who helps her learn to dance, and he gets her into shows.

Grimes’s performance as Ryan dazzled the audience with his singing and exceptional tap number that blew my mind. Tovah Feldshuh started her run as Mrs. Brice the same night as Lea Michele and took over the role from Jane Lynch. With just enough wet and dry humor, Feldshuh’s Mrs. Brice was by far the funniest character in the entire production, Even when she almost took a tumble on stage!

Lastly, I’d like to shine a center stage light on the show’s production and set design. One of my favorite takeaways from the show was the movement of Fanny’s home in the middle of the stage. The curved brick house moved in a circular motion and completely transformed the stage in every direction and scene. An aspect that I also enjoyed was the reveal of Fanny’s mirror at both the beginning and very end of the musical.

The show’s premise is Fanny retelling a story to her mirror about her life up to that moment. The mirror would come down and go back above the stable, but its presence when it appeared filled the stage because it was what Fanny was confiding in, and its presentation deserved its own round of applause. 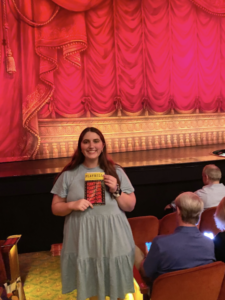 Lea Michele taking on the role of Fanny Brice captivated the internet and had ticket sales skyrocketing. It makes the role and performance even more special due to her involvement in the show Glee. Her character Rachel had been obsessed with Barbra Streisand, and Michele’s own involvement in this production gained much media attention. This show exceeded all expectations I had entering the theater. From the energy to the songs, design, and performances, this show showed that Lea Michele and the cast are Broadway’s greatest stars!