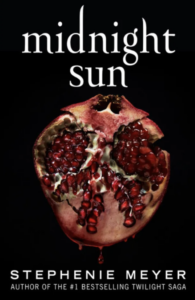 Adult fantasy fiction novel Midnight Sun is the perfect addition to one of the best series in entertainment. Written by author of the #1 best-selling Twilight Saga, Stephenie Meyer has yet again composed a work of art into words. If you were a fan of the series back when the first book was released in 2005, you are in for a treat. Meyer has a way of taking her readers into another world when it comes to her novels, especially here in Midnight Sun.

American novelist and film producer, Stephenie Meyer, received her BA in English Literature from Brigham Young University in Utah, in 1997. Twilight was the first novel she wrote which has sold over 100 million copies following 3 other books adding to the series. New Moon, Eclipse, and Breaking Dawn. Now there can be a 5th book added to the series, Midnight Sun.

Twilight is the love story between a 17-year-old human girl named Bella Swan and a 104-year-old vampire who’s stuck at the age of 17 named Edward Cullen. They meet in high school and embark on a journey filled with danger, thrill, and most of all love. The obstacles Edward and Bella face only add more fuel to the fire burning between them, drawing them closer to one another.

The first thing one can notice is the new narrator. If you’re familiar with the Twilight novels and even the movies, we know main character Bella Swan is the storyteller. The beauty behind Midnight Sun is that it’s told by Edward Cullen himself. It’s the same events and situations that took place in the original novel, however, Edward is the one telling it from his perspective.

For those who know the series, this book will simply be the same story told from a different point of view. If you’re new to the Twilight world, reading Midnight Sun will leave you eager to read the other novels, and just like that, you’re hooked.

Examining the main characters, you have two people from completely different worlds who develop this deep love for one another. Touching on the first chapter of the novel begins at the high school where they’re all sitting in the cafeteria. Edward’s been going to the school for a while, however, Bella is the new student and it’s her first day. Edward has the power to read people’s minds, when he tries to read Bella’s he cannot and he’s caught off guard. This is where that initial interest begins. Someone so disgusted with boring humans is now heavily intrigued with one. From this very moment is where their journey begins and it is such a unique love story that’ll have you turning page after page.

The main theme in Midnight Sun is dangerous and powerful love. The danger that lurks within the love growing between Edward and Bella is one of the key factors in the novel. Meyer does a superb job of always drawing attention to this theme of dark love in each chapter. Referring to chapter 5, before realizing the love he has for Bella, he has a feeling that it’s coming. He thinks, “it would be exactly like falling: effortless. Not letting myself love her was the opposite of falling—it was pulling myself up a cliff face, hand over hand, the task as grueling as if I had no more than mortal strength” (Meyer, 88). There are many reasons why they shouldn’t be together which only makes them want one another even more.

Whether you’re a returning fan or a new one, Midnight Sun is the perfect book to cuddle up and read. Halloween might be over, but this novel will restore the spooky, eerie feeling you might be missing. Totaling 658 pages, this novel is filled with the perfect combination of thriller and romance. Once you finish you’ll see why Meyer has done it again, writing a novel so perfectly that just sweeps you in.