Super Bowl LIII was played on Sunday, February the 3rd, and let me add my name to a long list saying it was the most disappointing Super Bowl in recent memory. Not only were the Los Angeles Rams and the New England Patriots boring to watch, but the commercials this year were also incredibly dull. Not to mention the halftime show was far from even subpar, to put it best.

Firstly, it was clear from the beginning that both teams were not playing to win, they were simply playing to not lose. Secondly, I think most Rutgers-Camden students did not care nearly as much about a Rams-Patriots matchup as they did about last year’s Eagles-Patriots matchup. And to top it all off, the Super Bowl was the least-watched Super Bowl since 2009. This year the Super Bowl had an audience of only 100.7 million viewers, a dramatic drop from the 2015 high of almost 115 million. One main reason for this was that it was reported that a majority of New Orleans boycotted the Super Bowl. As you may recall an officiating error helped to keep the New Orleans Saints out of the Super Bowl and allowed the Rams to move forward. So most people in the tristate area were ultimately uninterested in the Super Bowl because the Birds were not playing but also because the Rams had no business playing in Super Bowl LIII.

The only upside of Super Bowl LIII is that sports professionals said it was the best defensiveplayed Bowl since 1971. The Patriots’ defense was able to stop the Rams in their tracks, Bill Belichick’s defense allowed the Rams only 9.1 percent of their regular-season scoring average. According to ESPN statistics, this makes Super Bowl LIII the greatest defensive performance of all of Super Bowl history, which makes for a slightly interesting NFL statistic and for an immensely uninteresting Super Bowl.

Like I mentioned earlier, the Halftime show was incredibly subpar. In fact, it was just plain awful; Maroon 5’s performance was alright, but when Adam Levine begin taking off his clothes, it began to come across as a bit awkward. Travis Scott, who is an incredibly great musician and powerful in concert, also came across as awful as the Super Bowl. I think most people were not prepared to hear Scott’s non-auto-tuned rendition of Sicko Mode. To be honest, the most notable part of the Halftime show was the 5 to 6 seconds of SpongeBob’s rendition of Sweet Victory, and even then it was only 5 to 6 seconds. However, even after this disappointing performance I was still hopeful that the game would pick up. I was wrong. Like most Super Bowls in the last two decades, the Patriots ended up winning again and Belichick and Brady received another ring.

The biggest takeaway from this Super Bowl is that it was won entirely through field goals, and that Nick Foles is still the last quarterback to throw a winning touchdown in a Super Bowl. Go Birds! 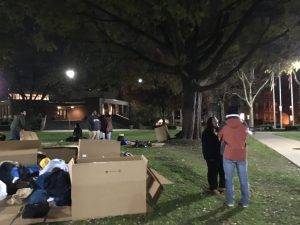