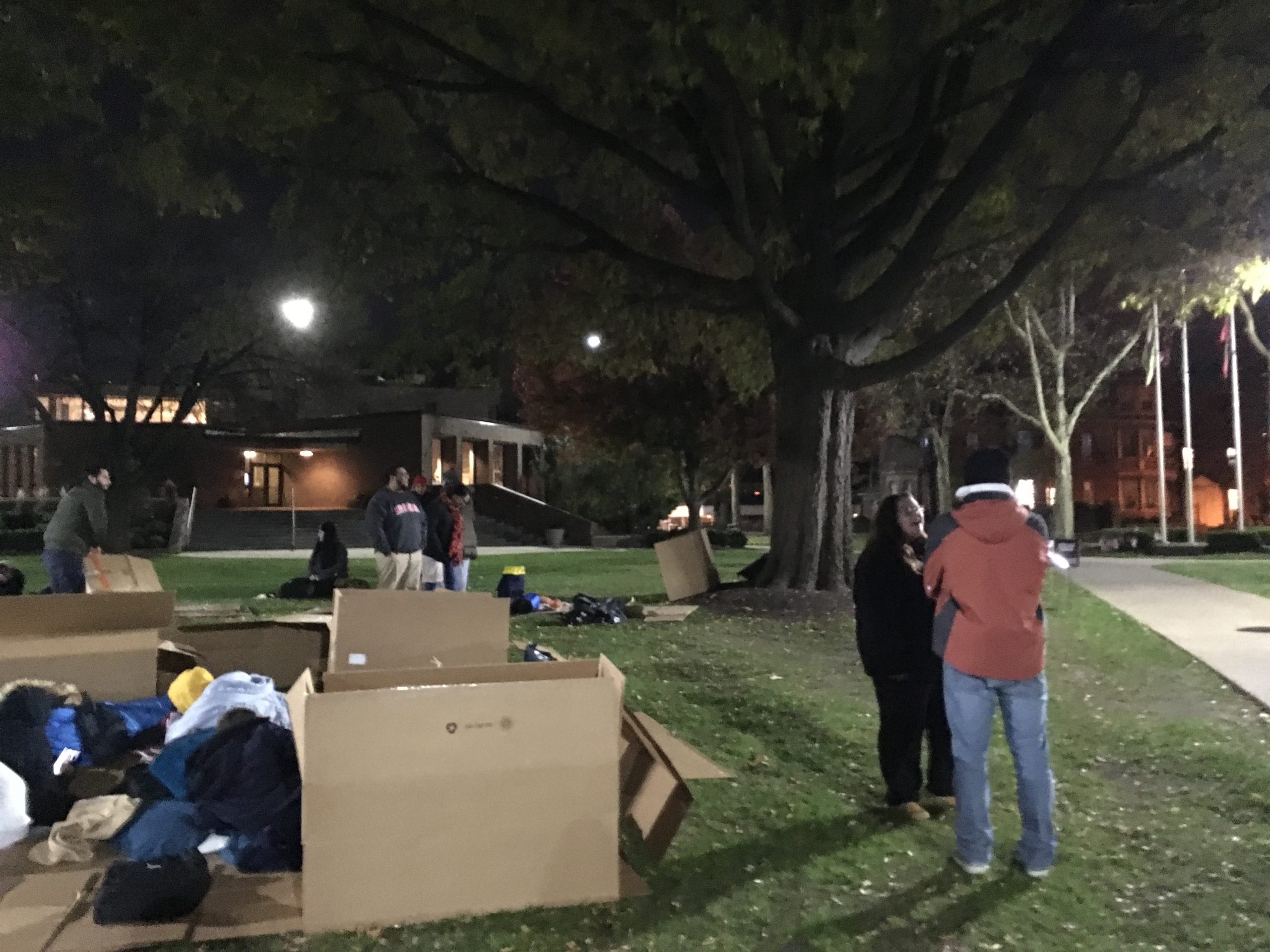 It was 8 p.m. on a Thursday evening. The temperature was 35 degrees, cold for November, and students were trickling into the Campus Center carrying sleeping bags and stuffed animals. Upon first glance, it seemed as though there was a slumber party happening instead of an event meant to raise money and awareness for a local homeless shelter.

Rutgers students were preparing to sleep outside in support of Joseph’s House and to highlight how homelessness exists and is addressed in our university’s host city of Camden.

Joseph’s House in South Camden is not just a place where one can get a meal and a warm bed, although it does it succeed in accomplishing this mission. They also offer addiction counseling, case management and aid in job and housing placement.

The evening kicked off with indoor programming which included speakers, like Tricia Bradly, program director of Joseph’s house, and Maria Serra, director of the Student Wellness Center at Rutgers.

As college students, donating money is not always a viable option but Bradly spoke of a small, free way that students can still make an impactful change: “Be kind, look someone in the eye and tell them to have a nice day.” This small act of acknowledgement goes a long way for someone who is often ignored by everyone around them.

Speakers were followed by a variety of interactive activities organized by students and student organizations such as the College Democrats.

One said activity involved just a deck of cards. Attendees were told to carry a card on their foreheads and directed to interact with each other, but to avoid those wearing certain numbered cards. These cards were meant to represent the homeless population and how they are often ignored by others’ in society. A shocking 40% of Camden residents face housing insecurity.

The event was spearheaded by Nitan Shanas, a junior at Rutgers-Camden studying Psychology and Urban Studies and a member of the Civic Scholars program, which was the driving force behind the sleep out.

The idea came to Shanas about a year ago. Dedicated to his work at Joseph’s House, Shanas was looking for a way to do more and expressed this desire to program director, Tricia Bradly. She alerted him of events going on around the country similar to this one.

After that it was a matter of partnering with Joseph’s House and getting support from RUC’s Office of Civic Engagement and various student groups.

After the indoor programming, students headed outside to start making camp for the night which consisted of cardboard boxes and blankets in the campus quad. Some participants huddled together for warmth. Many found the conditions too cold to bear.

Another issue facing the homeless population which was highlighted during the event was security. Student participants had access to the campus center to use the bathroom and a security guard stationed outside and inside the campus center. Those who face homelessness do not have access to the security and facilities that those as college students had.

During the night, volunteers woke up sleeping students with sirens and flashlights telling them to move it along. This simulation was just a small glimpse into the realities of homelessness.

As the night stretched on, the temperature dipped five degrees, to below freezing. By 5:30 in the morning most were still asleep or anticipating getting indoors. At 6 a.m., the students made their way inside to warm up over coffee and donuts while they reflected on the evening.

Over reflections, students spoke about how they were cold and sought out warmth in each other. Associate Chancellor Nyeema Watson urged students to bring this warmth to everyday interactions. “You put your physicalness into this,” she said. “You put your bodies into this. To try to walk in somebody’s shoes is a powerful experience.”

In the end, over $5,000 was raised for Joseph’s House. Students were made more aware of the struggles and causes of homelessness, the complex issues often intertwined with being homeless, and left with the message that a simple act of kindness can go a long way.

0
Next post Super Bowl LIII: Could It Get Any Worse?
Anel Fajardo